Browse the Albania & Kosovo itinerary or read the detailed info below.

Introduction of the tour: 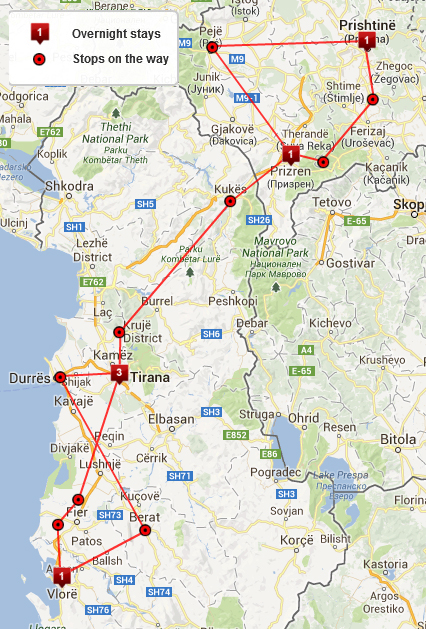 This tour is for people interested in the most unknown countries of Europe, Albania and Kosovo (also extendable with visiting Macedonia). Albania just opened up for the rest of the world after a long period under Dictator Enver Hoxha and is for a lot of people an interesting destination to visit, so is Kosovo. This country declared itself independent in 2008 and is the newest country in Europe. Both countries have their uniqueness, Albania with its cultural and historical heritage, beautiful beaches and welcoming people, Kosovo with its interesting history, delicious wines and rich natural resources.

This tour last 6 to 10 days (tailor-made up to your wishes) and the visits may include:
Tirana – Ardenica– Apollonia– Vlora – Berat –Kruja – Durres – Prizren – Pristina – Extendable with Skopje and Ohrid.

Day 1: Tirana
Arrival at “Mother Teresa” Airport, meet & greet by our representative and transfer to hotel. Visit the National Historic Museum in Tirana offering an in depth introduction to Albanian history from prehistoric times to present day. Welcome dinner at a traditional Albanian restaurant with live music. Overnight in Tirana.

Day 2: Tirana – Ardenica – Apollonia – Vlora
After breakfast we depart for Vlora. On the way to this beautiful coastal town we visit Ardenica and Apollonia. Ardenica is an Orthodox monastery built in the 13th century. It is thought that it was in this idyllic place that the marriage of the Albanian national hero Scanderbeg was celebrated in the 15th century. After Ardenica we proceed to Apollonia, situated on the famous Via Egnatia. Apollonia was founded at the beginning of the 7th century BC by the Greek colonists and in Roman times, it was a large and flourishing city (with 50.000 residents in the second century BC) near Aos river (today Vjosa). The monastery (which houses the museum) courtyard enclosed a Byzantine church dating back to the 14th century. We will have lunch in Apollonia. After lunch we continue our trip to Vlora where we will visit the Independence Museum which is situated in the original house where the first independent Albanian Government had its seat. Afternoon & evening at leisure. Overnight in Vlora.

Day 3: Vlora – Berat – Durres – Tirana
After breakfast we will depart for the city of Berat, a UNESCO World Heritage Site. The city is also known as “the city of thousand windows”. Here we will have a walk in the neighbourhood called “Mangalem” and visit the ethnographic museum. After this visit we will have lunch in a traditional restaurant. Afterwards we have continue our tour to the Castle and the Onufri museum. People are still living within the walls of the castle, just like their ancestors did. Onufri was an Albanian Icon master painter of the 16th century who painted many orthodox churches in Albania and Greece. In the afternoon we continue to Durres, the second largest city in Albania, where we visit the Amphitheatre and the Archaeological museum, located in the middle of the modern city. Afterwards we head back to Tirana. Overnight in Tirana.

Day 4: Tirana – Kruja – Kukes – Prizren
After breakfast we will depart for Kruja, which was the centre of the legendary Albanian resistance against the Turks led by our national hero, Skanderbeg. Kruja is located on the cliffs of mount Kruja which offers superb views of the coast and the surrounding villages. Here we visit the Kruja fortress, the Skanderbeg museum, the Ethnographic museum and the famous old Bazaar street. From Kruja we continue to Kukes, in the North East of Albania, where we will have lunch. Afterwards we continue our trip which takes us through a brand new highway slicing through high mountains towards the beautiful Ottoman style town of Prizren in Kosovo. Prizren is a city where three major religions and great cultures come together. We visit several sites such as the Castle of Prizren, the Orthodox Church, the mosque and the catholic cathedral. In the afternoon you will have some free time to stroll among the streets of this beautiful city. Overnight in Prizren.

Day 5: Prizren – Peja – Pristina
In the morning there will be some free time to explore the city of Prizren before we head to the North of Kosovo to visit Peja, located in the national park of Bjeshket e Nemuna where we have a delicious traditional lunch and a short hike through the mountains before continuing to the capital of Kosovo, Pristina. Here we will visit several sites such as the new-born monument, mother Teresa Boulevard and the museum of Kosovo. Overnight in Pristina.

Day 6: Pristina – Gracanica Monastery – Gadime caves – Sharr National Park – Tirana
After breakfast we will visit the South of Kosovo before returning to Tirana. On the way we will pass by the Monastery of Gracanica, part of the Kosovo’s Orthodox Monuments which are a UNESCO World Heritage Site. Close to this Monastery, the caves of Gadime can be found. The caves have been discovered recently, in 1969 when one of the habitant families ran into the channel leading to the cave, while trying to build the foundation for their new house. Stalagmites, Stalactites and Aragonites are rare characteristics of the cave. Continuing our trip to Tirana, we pass through the Sharr National Park where we will have lunch in the mountains close to the city of Brezovica. After this lunch we drive straight to the capital of Albania where you will have the rest of the afternoon at leisure. Overnight in Tirana.

This tour can be tailor-made and extended up to your wishes. Cities of interest to be added could be:
Gjirokastra, Korca, Saranda (Butrint) and Pogradec in Albania. Ohrid, Struga and Skopje in Macedonia.

#Albania has always been an in-the-know spot for well versed European travellers, but has made a resurgence of late. https://t.co/BZEUGZhIHD